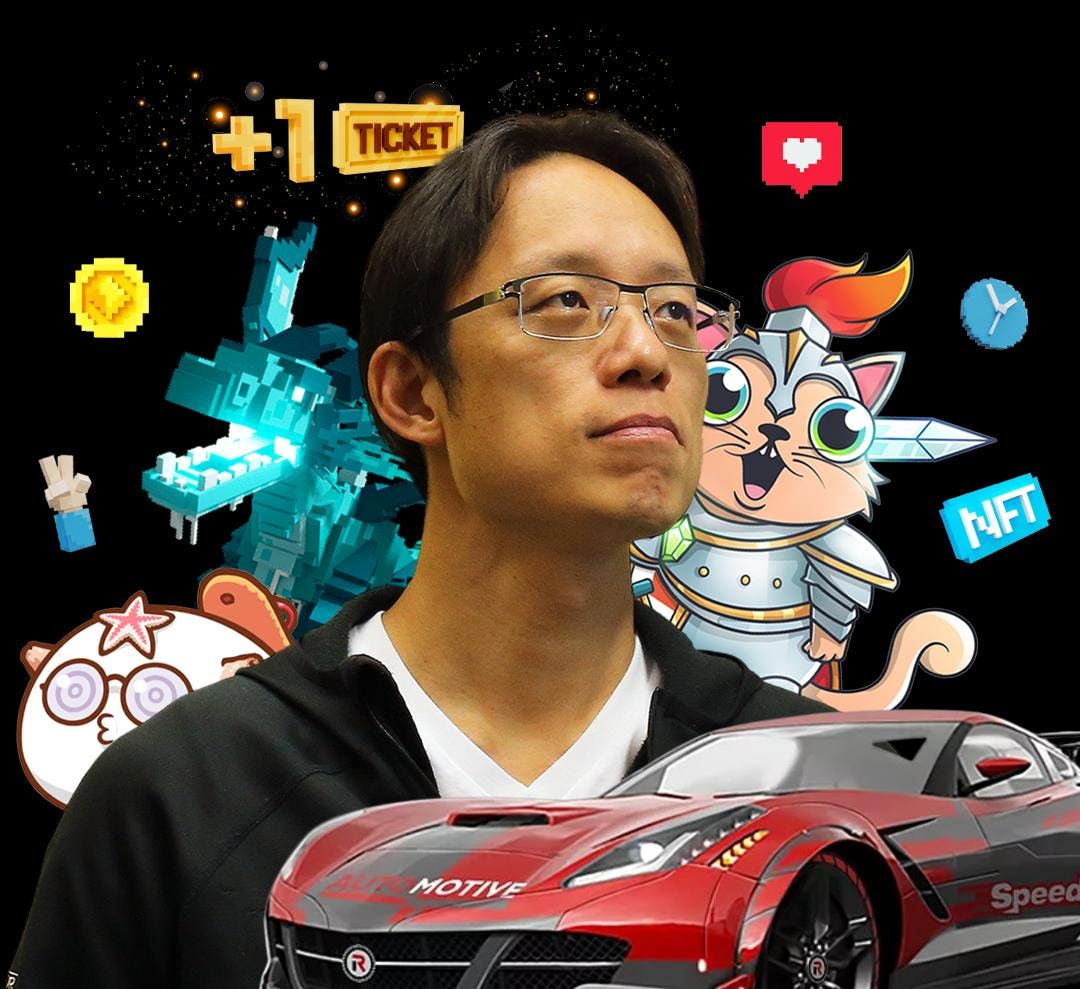 Yat Siu is exhausted. The 49-year-old Austrian-born, Hong Kong-based exec isn’t sleeping more than a few hours a night these days but can’t stop himself from jumping into high gear when asked about his blockchain gaming business, Animoca Brands.

Sporting a hooded black jacket and half-rimmed glasses, he wildly gesticulates as he expounds on the glorious destiny he sees for gaming decentralization and digital property rights.

“Maybe we can even reshape how people think about classic forms of capitalism,” he says.

Already this future—ruled by non-fungible tokens (NFTs) and blockchain technology—has been this Siu’s salvation.

Just over four years ago, Animoca Brands was struggling. Revenues at the tiny mobile game business, which he had cofounded with David Kim, a former Softbank partner and ex-CEO of early internet success Mail.com, in January 2014, had fallen 25% to $5.2 million and its market capitalization (improbably Animoca Brands was public, trading on the Australian Stock Exchange) was less than $6 million.

Then, in 2017, Siu stumbled across CryptoKitties, an early blockchain-based marketplace where users bought, sold and collected virtual pets. He caught the bug and invested in its Vancouver-based parent, Dapper Labs (then called Axiom Zen), a company now worth $7.6 billion.

It was the first of what would grow into more than 150 NFT-related investments. Animoca Brands now has stakes in most of the world’s largest and most successful NFT businesses, including OpenSea (the largest NFT marketplace with estimated 2021 revenues of $375 million), Dapper Labs, which created the NBA’s Top Shot platform (nearly $1 billion worth of basketball “moments” sold since November 2020) and Sky Mavis, maker of Axie Infinity, last year’s blockbuster NFT game (valued at an estimated $3 billion).

“The only place we’re not in is probably Antarctica,” Siu says with a laugh.

In mid-January, Animoca Brands raised nearly $360 million at a valuation of $5.4 billion, more than doubling its previous mark of $2.2 billion from October. Forbes estimates that Siu has a 10% stake worth nearly $500 million.

Investors included Liberty City Ventures, Soros Fund Management and Winklevoss Capital. (Animoca Brands is reportedly in talks with global investment firm KKR to add around $140 million to the January round.) Since its dark days in 2017, the company has grown from 57 employees to more than 600.

In the first nine months of 2021, Animoca Brands generated $670 million in revenues, with about $530 million coming from gains on digital assets and investments. Its coin reserves were valued at nearly $16 billion at the end of November.

Overall, the global market for NFTs swelled to $25 billion last year from $100 million in 2020. A fifth of that comes from video games, according to NFT tracker DappRadar. Much of the action has occurred in places like the Philippines, where low-income players have embraced a “play-to-earn” model that can net them a steady income of a few dollars a day.

Western gamers have been less eager to embrace the trend. Blockchain gaming is either the future of the $200 billion video game industry–or it’s another bubble waiting to burst. Given the range of Animoca’s holdings, lots of smart money is looking to the success–or failure–of Siu’s outfit as a litmus test for viability of blockchain gaming.

“There’s very few times that you can feel like you can help shape an industry,” Siu says. “That’s very different from seeing a rising tide and an opportunity to participate. But here, you could help shape it in the manner that, at least we think, could be a net positive for everyone.”

The concepts behind blockchain gaming have been around for some time now, dating back to the thriving economies of online multiplayer games of the early 2000s, especially World of Warcraft, and later the proto-metaverse project Second Life, which had its own digital currency (the Linden Dollar) and was home to the first virtual real estate boom (and later bust) in 2006.

Blockchain gaming a massive bet on the idea of “true digital ownership” where players can not only buy and sell items (think unique clothing or superpowered swords) within a game but where those assets have an existence (on the blockchain) independent of that game.

How that plays out practically in an industry where competing game developers can’t even agree on the most basic standards (there is disagreement on which direction should be considered “up”) is anyone’s guess, but one NFT-gaming application has already caught on: Play-to-earn.

Consider The Sandbox, a mobile game that Animoca Brands acquired in 2018 and transformed into a blockchain product. A player can purchase a virtual piece of land for about $4,000, fill it with custom buildings, objects or characters and flip it for a higher price, just by putting the time in.

Animoca Brands pockets a fee every time they’re traded. The Sandbox also has its own in game currency, called SAND, that corresponds to real world value—it’s market cap is currently $4.5 billion, according to CoinMarketCap.com.

Animoca Brands doesn’t collect royalties on the token but has accumulated a reserve that shows up on its balance sheet.

“Nobody’s thinking about, in a game design, how much can we give back to the players?” Siu says. “It’s really been always about the business.”

Siu’s passion for technology burned from an early age. Growing up in Vienna in the 1980s, he felt like an outsider due to his Chinese heritage. He found refuge in computers, and the burgeoning internet, to escape his loneliness.

He taught himself to code on an early Texas Instruments computer, a “glorified calculator” as he says, and later progressed to an Atari ST. Using its MIDI port to connect to a keyboard, the teenaged Siu started publishing music composition software online.

Unaware of his age, Atari reached out to him to discuss a job, only to be dumbfounded when he arrived at the company’s Austrian outpost. Still, they liked his online postings enough to hire him as a consultant.

After dropping out of college, and bouncing around through a handful of entrepreneurial ventures, Siu founded Hong Kong-based email company Outblaze in 1998.

It was his first big score. In 2009, he sold the company’s cloud division to IBM for a sum in the hundreds of millions. Siu used most of his multi-million-dollar payday to help recapitalize the company during the ensuing economic downturn.

Inspiration for what to do next came in the unlikeliest of places. Sick of carrying around a stack of Baby Einstein flash cards to quiz his first child, Siu asked his team at Outblaze to develop a mobile app version. It was downloaded around 20 million times, leading him to create Animoca, an Outblaze subsidiary, to develop games in 2011. Renamed Animoca Brands it was listed on the Australian Stock Exchange in 2015.

It was hardly smooth sailing. In 2012, when Apple, one of Animoca’s biggest distribution platforms, abruptly removed all of Animoca’s games from the App Store. No explanation was given. He suspects his strategy of launching a new game every week was deemed “spamming” by Apple.

Siu shifted the company to producing kids’ games that licensed popular brands like Thomas and Friends, landing back on the App Store in 2013 until Apple de-emphasized the category, dealing a crushing blow. (Apple did not reply to a request for comment.) By 2017, Animoca Brands was a failing business.

Then the cofounder of a gaming startup Siu had funded told him about their new NFT project: CryptoKitties. The virtual felines were an instant success, becoming so popular that a month after their launch, in December 2017, they nearly crashed the Ethereum blockchain.

Months later, the crypto market itself tanked, leading to 2018’s “Crypto Winter,” which left Bitcoin and Ether at trading at momentary lows of $3,200 and $87, respectively.

Siu held strong. That year he congregated with what he called “250 diehard believers, all just really willing to drink our own Kool-Aid” at a NFT conference in Hong Kong. He used the forum to forge relationships with companies that would turn to be some of his biggest wins: OpenSea, The Sandbox and Decentraland, a virtual real estate play with districts modeled after places like Las Vegas.

Embracing crypto put Siu in the crosshairs of the ASX, which was taking a cautious approach to digital assets. The exchange gave him a stark choice: Give up crypto or get out. “It was scary,” Siu says.

“If you’re delisted, no stock exchange was willing to look at you.” Animoca Brands was delisted in March 2020. (Technically, the company remains “public, but unlisted,” which means it operates like a private company with around 2,500 shareholders.)

Promising as it may be, the world still hasn’t figured out how to regulate cryptocurrency and NFTs. The controversial “play-to-earn” model and use of in-game currencies stokes fears of gambling, market manipulation and exploitation of workers in the less-developed world, who often rent NFTs from players in more developed countries in return for a share of their earnings.

Some Axie Infinity players, mostly based in the Philippines, play the digital monster game as their primary source of income.

Last year, the U.S. Congress introduced 35 bills on crypto and blockchain policy. Only one passed, though in Australia, the ASX announced plans to allow cryptocurrency exchanges and ETFs to trade on the exchange. Jack Dorsey’s Block (formerly Square) listed there in January. “It’s too big to ignore,” says former ASX regulator Greg Medcraft.

Not everyone shares Siu’s enthusiasm. Samson Mow, the chief technologist at Blockstream, which builds products to store and transfer Bitcoin, says the economics of an “Open Metaverse,” or an interchangeable collection of virtual worlds, works against game companies.

“If Call of Duty sold you some weapons, Ubisoft doesn’t want you bringing them into Rainbow Six because that eats away at their item sales,” Mow says.

“I just can’t see it happening to the way people are prophesying it will, like [the novel] Ready Player One where you just move seamlessly.” Mow adds that blockchain technology is far from being truly decentralized—Ethereum, the network powering nearly all NFT games, for instance, relies heavily on Amazon Web Services.

And much of it can seem faddish. Axie Infinity’s primary token, AXS, has lost nearly 60% of its value in the last three months, according to CoinMarketCap.com. Electronic Art’s CEO Andrew Wilson, who previously expressed interest in entering the NFT space, walked back his comments on a recent earnings call.

If the world’s major gaming companies are hesitant, Siu is not. He’s quick to brag about Phantom Galaxies, an upcoming PC and Mac game from Animoca Brands that he says will rival the quality of Triple-A games on consoles like PlayStation 5 and Xbox Series X.

Except for a small misfire from Ubisoft, no major publisher has ventured in blockchain gaming yet. But the audacity of the gamble speaks volumes.

“I think Triple-A has arrived and it’s just going get better from here,” Siu says. “It’s going to happen in a big way.”

PancakeSwap, Where Will a New Roadmap Take the CAKE Crypto?

One of the hot cryptocurrencies investors are watching today is PancakeSwap. Despite being down approximately 3%…

Zuckerberg-Trolling ETF Bets on Everything Metaverse Except Meta