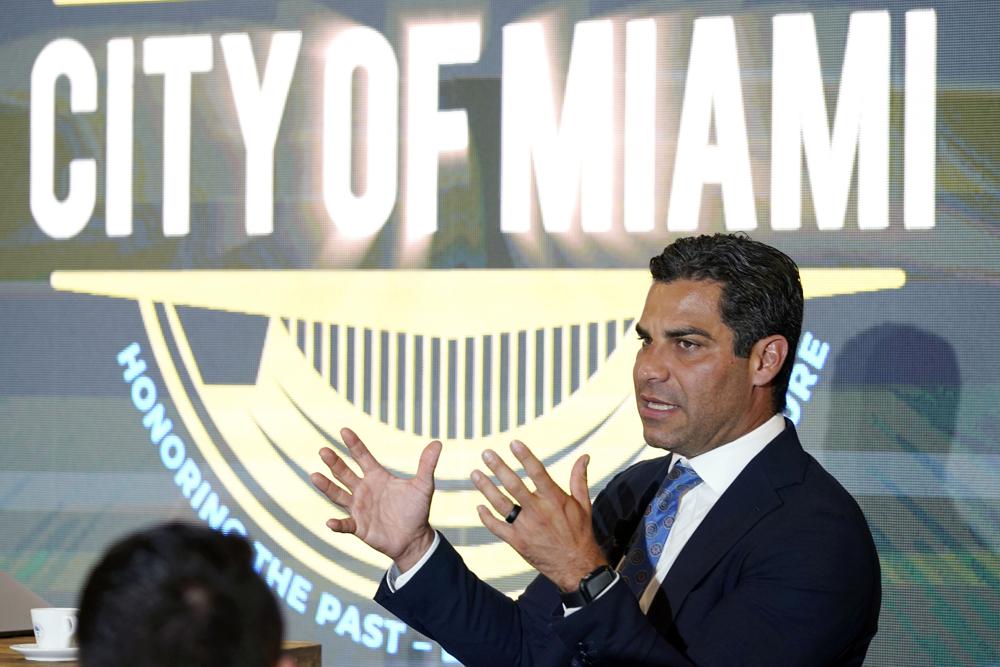 A small group of cryptocurrency enthusiasts has an offer that they’re hoping U.S. cities can’t refuse.

The group City Coins is asking Miami and New York to accept the equivalent of millions of dollars in a new cryptocurrency, and at least some of the money is real: Last week, Miami Mayor Francis Suarez announced that City Coins had transferred $5.25 million to the city.

The dizzying proposal has leaders in other cities, like Philadelphia and Dearborn, Michigan, clamoring to get in on a deal they hope might patch budgets, similar to how some cities and states had hoped lotteries or legalized gambling would be a solution to financial problems.

That hype also benefits people who get in early on the new currencies, which is part of what fuels arguments that cryptocurrency startups too closely resemble pyramid schemes.

When Suarez announced in November that his city would partner with the group, one of its leaders, Patrick Stanley, told news outlet and cryptocurrency price index company CoinDesk TV that Suarez “just turned his city into an oil producing country that gives Bitcoin yield to its citizens, like that is incredible.”

That hasn’t happened and there are a lot of hurdles to clear, both legal and technological, before it could.

For starters, the value of cryptocurrencies can fluctuate dramatically. The popular cryptocurrency Bitcoin lost close to half its value between November and the end of January, falling from a peak of $67,500 to just above $35,000; it has since bounced back a bit to around $43,000.

If it goes well, prices of the new cryptocurrency goes up, the city gets free money and the people mining Miami Coin also benefit.

Participants in the City Coins project hope that Miami residents will eventually be able to hold their identification, pay taxes or vote using the blockchain technology Miami Coin is built on — thereby increasing the coins’ value. The contract that City Coins signed with Miami does not mention any of these possibilities.

The proposed arrangement is unusual from an economic development perspective as well, in part because City Coins says it is not a company but rather a kind of collective. Its website does not list any employees or contact information besides a link to the messaging app Discord. It is registered in Delaware as a nonprofit organization. Online records show it is not registered in Florida.

Reached on Discord, community lead Andre Serrano estimated that the number of people involved in City Coins numbers between 10,000-15,000, though he’s basing that on City Coins’ Twitter followers and the people who have joined the Discord chat.

In a statement, Suarez said the city cannot legally hold cryptocurrencies. So for now, he said, “City Coins acts as a custodian of Miami’s rewards until they are converted into dollars and formally gifted to the city,” which the first $5.25 million was on Feb. 2.

For scale, the city of Miami’s operating budget adopted in October was more than $1.3 billion.

“We have a lot of ideas for how we can spend the money and we fully intend to listen to the community’s input as to how to deploy the funds,” Suarez said in a statement, suggesting education was a priority.

To John Forrer, a research professor at George Washington’s public policy school, the unprecedented arrangement presents potential pitfalls for any municipality that signs up.

“There is so much uncertainty and it’s so brand new, are you sure you’ve investigated all of the risks and that you have a way of handling them whatever they are?” he said, adding it’s important the city can hold the outside party accountable if needed.

In the contract City Coins signed with the Miami, Stanley is listed as the point of contact with an address at a Los Angeles strip mall. He has appeared alongside Suarez in interviews about Miami Coin where he is identified as the community lead for City Coins. He did not reply to questions about the structure and organization of City Coins. In public statements, Stanley has said he formerly worked with Stacks, the cryptocurrency ecosystem that City Coins is built on.

Liat Shetret, director of regulatory affairs and compliance policy at the risk analysis firm Solidus Labs, said cities may want to consider blockchain technology to increase financial transparency. But she’s worried that politicians are hawking cryptocurrencies as an attention-getting gimmick without preparing their cities for dealing with new problems such as money laundering.

The nature of the blockchain means that while it’s possible to see which accounts own Miami Coin or are mining it, the real identities of those people are not publicly visible. Currency exchanges ask for basics such as names, addresses and Social Security numbers; it’s unclear how much identifying information the coin creators collect. Participants do not need to be residents of Miami.

Neither Suarez’s office, Stanley nor the Stacks Foundation replied to questions as to whether any of them had access to the personal information of Miami Coin participants they had concerns about the anonymity of the people involved.

“Keeping bad actors off of these platforms is crucial,” Shetret said.

While New York’s mayor, Eric Adams, has also been a booster of cryptocurrencies, his administration has not yet signed onto the project, despite celebrating the launch of a New York City Coin in November.

Adams’ office did not reply to questions about whether the mayor was considering accepting any funds from City Coins.

But New York residents can’t currently buy the New York coin because the lone exchange offering it isn’t licensed in the state. “We’re optimistic that it’ll be approved by midyear,” said Larissa Bundziak, a spokesperson for the exchange Okcoin, which started offering the New York coin — to non-New Yorkers — on Jan. 26.

Last week, some City Coins participants expressed disappointment with how the experiment is going so far and argued in a chat room on the Discord app about whether the group should launch cryptocurrencies in new cities or wait for the value of the coins in Miami and New York to prove themselves more.

“Getting a city to claim free money is easy,” one participant wrote. “It takes more than that to actually provide value,” so that in the long term, there are good reasons for people to participate.

Altcoins Cryptocurrencies
Previous ArticleThe Art Of Connecting In The Metaverse
Next Article The millennials accused of laundering $4.5 billion in stolen crypto have been blogging about blockchain security for years. Here’s what we found.

El Salvador is looking for the right timing to launch a bitcoin-backed bond, which could…

NFTs: The Promise And Structural Hurdles To Widespread Adoption