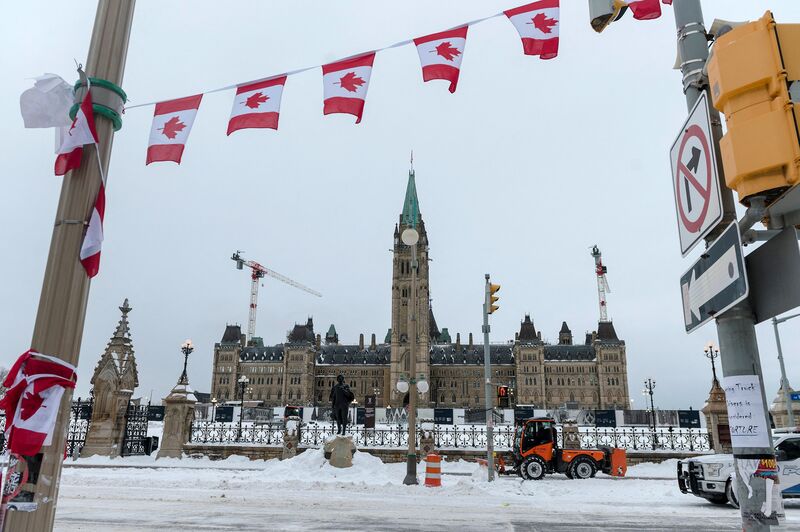 Police said they have largely cleared downtown Ottawa of the anti-vaccine protests that have roiled Canada and its capital for the last three weeks, as a financial crackdown widened to help prevent similar disturbances.

Though still facing pockets of protest, the police have made 191 arrests, with 107 people charged so far. Much of the city’s downtown is still ringed with fencing and subject to checkpoints to ensure protesters don’t return.

By Sunday evening, a possible end seemed in sight to the three-week-long protest against Covid-19 vaccine mandates and pandemic restrictions, which saw hundreds of semi-trailer trucks and other vehicles blockade the area of downtown Ottawa around Canada’s parliament buildings. The protest inspired similar encampments at border crossings with the U.S across the country.

To help end the crisis, Prime Minister Justin Trudeau invoked emergency powers for the first time in half a century, and those are now being used to choke off the financial flows that sustained the blockades.

Law enforcement officials said Sunday they had so far frozen 206 bank and corporate accounts related to the blockades; disclosed 56 pieces of identifying information of individuals, companies and vehicles that took part; determined the virtual addresses of 253 Bitcoin associated with the movement; and halted C$3.8 million ($3 million) that was sent through a payment processor.

With Ottawa starting to quiet down, police said they are still monitoring protesters to ensure they are not massing anywhere to attempt to return to the city. Police have pursued some protesters attempting to establish new encampments, including in the parking lot of a suburban baseball field.

Chief Bell would not say when he expected the operation to end.

1 million Shiba Inu users can’t be wrong… can they?