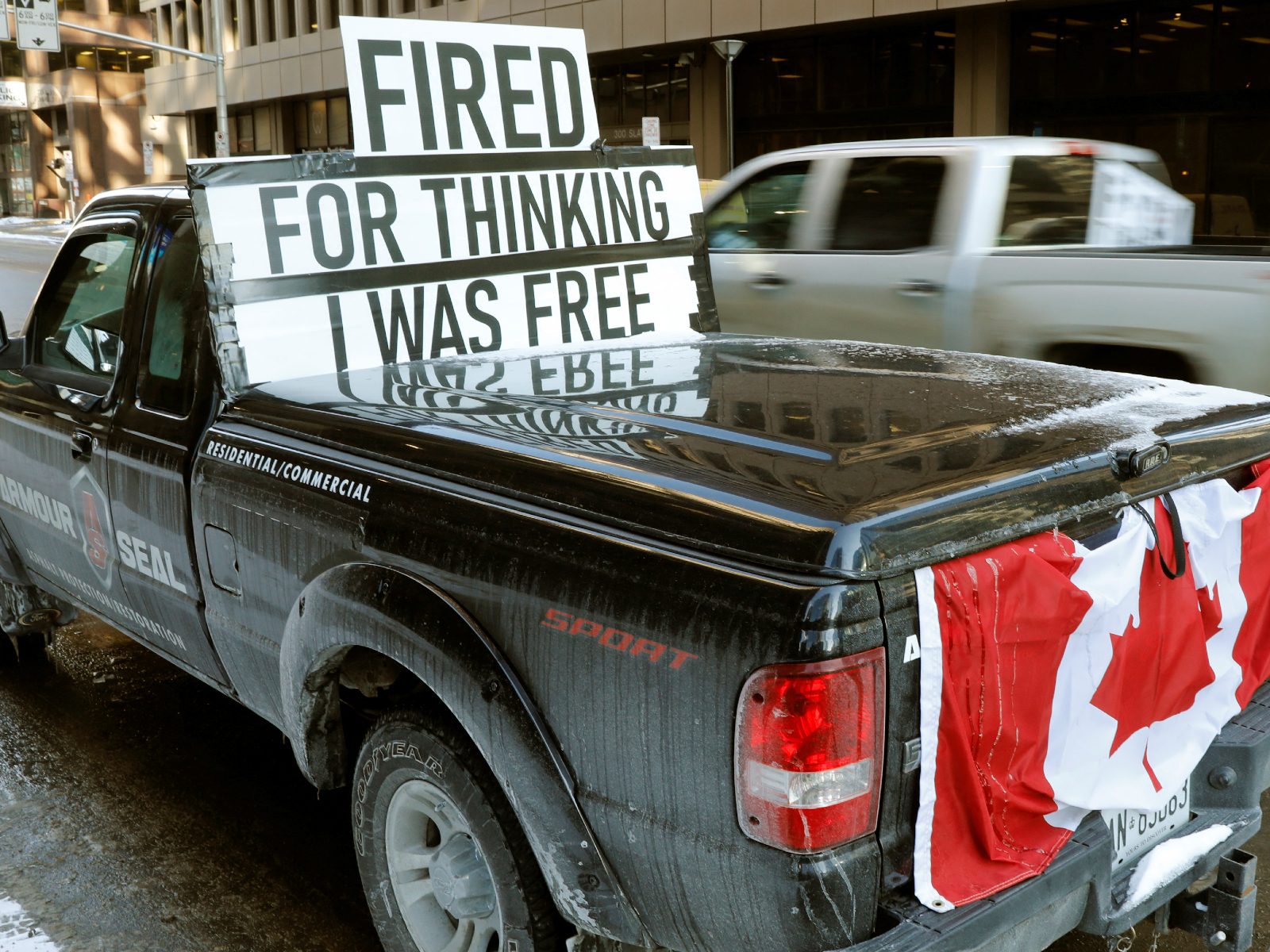 On Sunday, the streets surrounding the Canadian parliament in Ottawa were free of protesters and trucks for the first time since January after police cleared out the last of the so-called Freedom Convoy truckers who occupied the nation’s capital to oppose the country’s COVID-era restrictions.

During a three-day operation, Ottawa police deployed pepper spray and stun grenades to disperse crowds, towed away over 70 vehicles, and arrested 191 people, bringing a total of 389 charges against 103 of them.

Three of the protest’s key organizers were arrested and charged with “mischief,” and two of them are now out on bail.

The clearing of the capital came days after the federal Royal Canadian Mounted Police (RCMP) ordered a freeze on 206 bank and corporate accounts managing millions in funds related to the protests. The RCMP also flagged 253 Bitcoin addresses and forbid local crypto exchanges from facilitating transactions with the accounts.

While quiet has returned to Ottawa streets after three weeks of horn blaring by truck-driving protesters, the fallout of the nearly month-long saga will likely take longer to address.

In the capital city, police and barricades have replaced protesters and trucks and, across the country, politicians and citizens are confronting the divide in civil society left in the wake of the departing demonstrators.

What were truckers protesting?

The brigade of truck-driving protesters from across Canada first converged in Ottawa on Jan. 28, occupying various streets around the nation’s capital. The protest began in opposition to the government’s introduction of a mandate requiring all cross-border truck drivers to be vaccinated against COVID-19.

According to the Canadian Trucking Alliance, roughly 90% of Canadian truck drivers were already vaccinated, but a minority of truckers objected to the new requirement for drivers hauling goods between Canada and the U.S.

As the protesters and their convoy spread across Canada, the focus of the demonstration expanded to oppose all pandemic-era mandates, such as mask requirements and COVID vaccine passport check-ins.

With its purview widened to more common grievances, the Freedom Convoy gained support from Canadians outside the trucking industry who were tired of COVID-era restrictions. By early February, a GoFundMe account set up by one of the protest organizers, Tamara Lich, had raised $8 million in donations.

Last week, reports revealed that Silicon Valley billionaire Tom Siebel was one of the group’s leading benefactors, donating $90,000 to the Freedom Convoy movement that had also gained support from Tesla CEO Elon Musk and U.S. Republicans.

But in Ottawa unruly protesters—many of whom blared truck horns throughout the day, occupied residential streets, and threw loud parties—sparked counter-protests. With disruption costing the city upward of $800,000 per day in policing expenses and snarling U.S. cross-border trade worth $350 million a day, the government stepped in to shut the protests down.

For protesters, the first bad omen for their movement hit on Feb. 5 when GoFundMe suspended Lich’s fundraising account after receiving police reports of protest violence and other unlawful activity.

“This fundraiser is now in violation of our Terms of Service (Term 8, which prohibits the promotion of violence and harassment) and has been removed from the platform,” GoFundMe said, adding that it would return the $8 million raised back to donors.

Within days, the HonkHonkHodl account—which some say has ties to alt-right groups—raised over $500,000 in Bitcoin. But even cryptocurrency, hyped for its ability to evade censorship and capital freezes, wasn’t safe from Canada’s courts.

“We cannot and will not allow illegal and dangerous activities to continue,” Trudeau said as he invoked the Emergencies Act, which granted police greater leeway to impose fines, imprison protesters, and tow vehicles blocking roads.

Trudeau invoked the act a day after police cleared protesters from the Ambassador Bridge that connects Ontario to Detroit, Mich., and carries 23% of cross-border trade between the U.S. and Canada. Protesters had blocked the bridge for days, holding up $360 million of daily trade and drawing attention from the White House.

“At the borders in different places in the country, the blockades are harming our economy and endangering public safety. Critical supply chains have been disrupted. This is hurting workers who rely on these jobs to feed their families,” Trudeau said.

The Emergencies Act also compelled financial institution to comply with police orders to freeze funds associated with “designated persons”—in this case, protesters. With funds hobbled, public sentiment turning against them, and the threat of arrest and financial sanctions looming, the protest movement began to lose momentum.

In Canada’s capital, protesters continued to hold out. On Wednesday, Ottawa police distributed fliers to protesters telling them to leave or face arrest. Some protesters threw the notices in the trash and started a chorus of blaring truck horns, announcing their refusal to leave.

On Thursday, police arrested three of the Freedom Convoy’s most prominent leaders—Tamara Lich, Chris Barber and Pat King. The next day, police began clearing out protesters still occupying the city.

On Friday, hundreds of police moved in on protest camps in Ottawa city center and began forcing demonstrators to disperse. Over 100 protesters were arrested as some left and others resisted. When police returned to continue the operation the following day, they dressed in riot gear.

On Saturday, police made another 47 arrests, using pepper spray to disperse crowds. Although police initially said no protesters had been hurt, Ontario’s Special Investigations Unit—the police watchdog—said Sunday it is investigating the case of a woman who was trampled by a mounted police officer’s horse on Friday.

By Sunday, the majority of protesters and their vehicles had been cleared from Parliament Hill—the area surrounding Canada’s parliament building, which had become a central hub for the Freedom Convoy movement.

In place of heavy trucks that once blocked the streets, police have set up concrete barricades and high metal fences to keep protesters from returning.

“We’re not done with this operation yet,” interim Ottawa Police Chief Steve Bell told journalists on Sunday, adding that police will track down protesters who had been filmed breaking the law, and determine “how we maintain a presence and make sure that nobody returns to occupy our streets again.”

With the protests cleared and the main leaders arrested, debate has turned to whether Trudeau was justified in invoking the Emergencies Act. Over the weekend, Canada’s lawmakers debated that issue in parliament, deciding whether to ratify the Act.

Opinion is divided largely along party lines, with Trudeau’s leading Liberal party supporting the prime minister’s action and members of the opposing Conservative party denouncing the decree as the “latest and greatest example of attacks on our freedom.”

A decision whether to ratify the act is due on Monday. If parliament votes down the act, the special powers will be revoked. If the act passes, the powers will remain in effect for 30 days.

Although police cleared protesters from Ottawa, the tensions that sparked the movement in the first place remain, and there are concerns that protests may flare up again even though they lack public support.

Last week polling from the Angus Reid Institute (ARI), a non-profit research group, found that 72% of respondents agreed protesters should “go home, they have made their point.” ARI also found that 44% of Canadians are now more likely to support mandates for mask wearing and cross-border vaccine checks because of the protests. Only 21% were more likely to oppose the mandates while the remainder were unmoved either way.

“In the weeks since they inserted themselves directly into the conversation about restrictions, the protesters have seen the pendulum swing against their point of view,” ARI says, noting that 54% of Canadians wanted COVID restrictions to end when polled in December.

Even if this is the end of the protests—Canadian provinces are gradually easing COVID restrictions anyway—the cleanup is just getting underway. Officials have only just started to bring charges against protest leaders, process the millions of dollars in seized funds, and investigate the police operation itself.

In the words of Bell, “This investigation will go on for months to come.”

When you count users instead of dollars, the NFT world is tiny