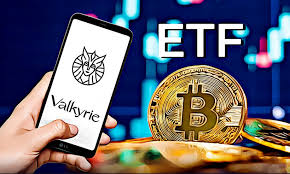 Valkyrie’s bitcoin mining exchange-traded fund is slated to list on Nasdaq at tomorrow’s opening bell, according to a spokesperson for the issuer.

Valkyrie filed a post-effective amendment for the Valkyrie Bitcoin Miners ETF on January 26, and then sought immediate acceleration of its effective date. Nasdaq joined the request today since the exchange approved the fund to list. It will begin trading tomorrow at the open under the ticker “WGMI.”

The fund will invest in public companies in the bitcoin mining industry. It doesn’t hold bitcoin directly, but rather invests in firms like Argo, Bitfarms, Hive and Marathon among others. It may invest up to 20% of its net assets in firms that hold the cryptocurrency on their balance sheet.

Additionally, its fact sheet commits that 80% of its holdings will be firms that utilize at least 50% renewable energy for their mining activities.

WGMI is the third fund in a series of digital asset-focused ETFs the issuer plans to offer. It successfully brought a bitcoin futures ETF to market in October of last year, as well as the Valkyrie Balance Sheet Opportunities ETF, which invests in publicly traded firms with bitcoin exposure.

A spot bitcoin ETF has yet to reach the market due to a myriad of stalls and rejections from the Securities and Exchange Commission, including for Valkyrie’s own offering.

Africa’s Poised for a Bitcoin Revolution in 2022