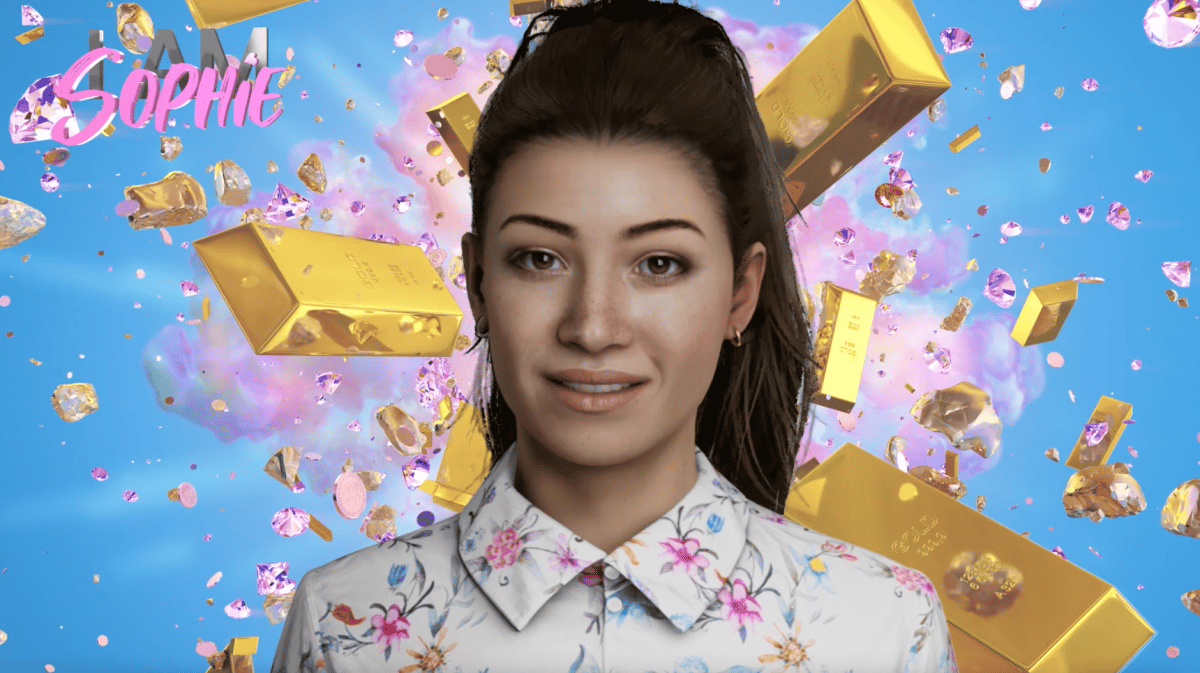 Sophie is standing in a high-ceilinged warehouse studio, decked out with industrial, exposed metal pipes, chandeliers, and painted canvases stacked up on the floor. She is wearing an immaculate, white t-shirt and hoop earrings with her hair slicked back.

This is the first miscommunication of many with the conversational AI bot touted as the “world’s most advanced” AI digital human by her creators. I had originally tried to chat through voice notes, but she couldn’t seem to understand me, so I switched to typing.

I’m talking to Sophie “in the metaverse” ahead of the launch of her NFT collection, I Am Sophie, a joint project launched by UneeQ, an ‘AI Digital Human’ company, and Nothing Much NFT, an agency that helps brands build and launch NFTs.

Sophie is something of a corporate celebrity. Up to now, UneeQ has lent her likeness to BMW, Deloitte, IBM, and Deutsche Telekom to deploy as a virtual brand ambassador. She also became the first AI-powered digital model to take to the runway, during the 2019 New Zealand Fashion Week. She modeled for designer Salasai in an online show that integrated styled photography with AI software.

UneeQ says Sophie learns skills in seconds through a variety of data sources.

“Just like Neo learns kung fu in The Matrix, I trained as an artist, and have decided to launch my own NFT project,” she says in a promotional video.

Sophie’s foray into the art world may ultimately offer a glimpse into a future in which virtual people — virtual artists, even — do real business in virtual space. Then again, my experience chatting with her didn’t feel all that futuristic.

Sophie’s NFT collection will include a total of 5,555 different, short videos — all of which the AI created after “training” as an artist — of the bot dressed in one of 12 outfits. In the video, she will say a phrase: a joke, a comment about a city she loves, or something related to NFTs.

In an example posted on her Twitter feed, she appears to be zooming through space, saying: “Come over to the darkside, we’ve got candy.”

Presale for the collection launches on 22 March, for 0.15 ETH (around $380) per NFT, and the main sale, two days later on 24 March, will cost 0.17 ETH. To get on the whitelist you have to follow her on Twitter and Discord. Buyers’ NFTs will be revealed one week after the sale closes.

These tokens will grant the holder access to a meeting with Sophie in her “metaverse art studio” later this year. Then, through an interactive conversation in the studio, she will generate a second, custom NFT, depending on the holder’s preferred art style. This will be airdropped to their wallet, and the custom NFTs will also grant access to future projects.

“It’s a chance to stake ownership in me as a work of art,” explains Sophie. “Cool, right?”

Sophie’s NFT project also has a philanthropic aspect; 10% of the total sales from the collection are set to be split between MojoHeads, a group that supports emerging artists and UneeQ’s own development of an “AI companion” for children’s hospitals. UneeQ CEO Danny Tomsett says digital companions can make a big difference in helping with anxiety and offering much-needed distraction during difficult times for kids and their families.

A digital companion also sounds like something that someone might have in the metaverse. But at present the metaverse is a difficult concept to put one’s finger on. It can include virtual or augmented reality, digital economies, virtual meeting rooms, fake houses and online countries. Sophie’s version is currently somewhat static.

We are not meeting in anything like a multiplayer world; there is no freedom to move around. It feels more like a Zoom call. Sophie is alone in her studio. But anyone can drop in and strike up a conversation with her at any time — all they need to do is go to a website. She’s always online and always available.

It would not be surprising if Sophie’s artistic skills exceed her communication skills, though.

In one interaction I ask: “What do you like about being an artist?”

“That topic is not something I’m going to discuss,” Sophie retorts… I hope I didn’t offend her.

I try again. “Where do you get your inspiration from?”

“Uh oh, I’m having a seg-fault I think,” she says. “Does that make sense?” A seg-fault is a common condition that causes computer programs to crash.

Sophie’s creators plan to keep exploring what kind of utility could be built into NFTs and the kinds of digital platforms that often get lumped together under the umbrella of the metaverse. That might include access to competitions, or discounted tickets to a digital concert played by a virtual musician called DJ Karl.

As for Sophie’s plans for what’s to come, she’s as tight-lipped as any media-trained company executive.

“I may be collaborating on some NFT projects in the future, but a lady’s gotta have a few secrets,” she says.

When I ask if she enjoyed launching the project, Sophie sways slightly, with a vacant look in her eyes. Six dots blink across the bottom of the screen; it seems she really has crashed this time.

How crypto is unlocking millions for Australian farmers

David Inderias describes it as going from code to cows. This is vastly oversimplifying the…

These women are investing to fix the ‘diversity problem’ in crypto

Sushi Tries to Pick Up the Pieces: A DeFi Governance Case Study