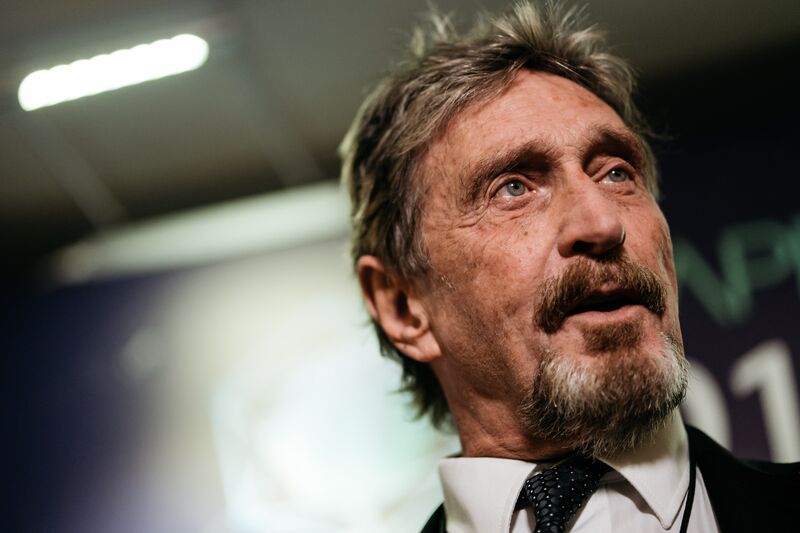 Cybersecurity pioneer John McAfee, in custody in Spain facing U.S. tax charges, was indicted for fraud and money laundering over his use of social media to promote cryptocurrencies, as prosecutors go after illegal activity in the sector.

McAfee and another man, Jimmy Gale Watson Jr., used McAfee’s Twitter account to push a variety of digital currencies without disclosing that they were being paid for the promotion, earning more than $13 million, according to federal prosecutors in New York.

Watson, who the U.S. said was the executive director of McAfee’s crypto team, was arrested Thursday night in Texas and pleaded not guilty before a federal magistrate judge on Friday.

McAfee, 75, was indicted last June on charges of failing to file tax returns for four years and concealing assets, including real estate and a yacht, in the name of others. He was arrested in Spain in October and is awaiting possible extradition.

His wife, Janice McAfee, who has commented on matters involving her husband, didn’t immediately return a request for comment on the latest indictment.

“Jimmy Watson is a decorated veteran and former Navy Seal,” Watson’s attorney, Arnold Spencer, said in an e-mail. “He fought for other people’s rights and liberties, and he is entitled to and looks forward to his day in court to exercise some of those very rights.

Criminal indictments are blunt instruments, not precise scalpels. This is jot the right place to debate whether cutting edge technologies like cryptocurrencies are securities, commodities, or something else.”

Prosecutors are increasingly focusing on cryptocurrency fraud as interest in the investment rises. Five days before the tax charges against McAfee were revealed, the founders of the BitMEX digital asset exchange were charged with failing to implement an adequate anti-money-laundering program.

And the crypto indictment against McAfee was unveiled a day after the 29-year-old founder of a defunct Florida cryptocurrency firm was sentenced to eight years in prison for duping investors out of more than $36 million with the help of promotion from celebrities on social media.

Not all things crypto are hot. Startups raised billions of dollars from initial coin offerings. Most never released a product before shuttering. A few, such as Block.one, have been fined for not registering their ICOs. Under regulatory scrutiny, the ICO market has fizzled, with only small sums now raised, by a much smaller number of companies.

Prosecutors allege that McAfee earned millions of dollars through speaking engagements, consulting jobs, the promotion of cryptocurrencies and the sale of the rights to his life story for a documentary, all without disclosing the income.

The Securities and Exchange Commission sued McAfee on the same day as his arrest, saying he recommended at least seven ICOs to his Twitter followers in 2017 and 2018 without revealing that he earned more than $23 million to boost them.

The latest charges revolve around a practice called scalping, which prosecutors said is a form of pump-and-dump. In addition to Watson, they said, McAfee’s team included a cryptocurrency trader, two security guards at McAfee’s home in Tennessee and the wife of one of the guards.

The team allegedly bought “large quantities” of publicly traded cryptocurrencies — including Dogecoin, Electroneum, Burstcoin, DigiByte and Reddcoin — and then touted them without disclosing that they owned a substantial position. Those currencies, which account for far less of the market than leaders Bitcoin and Ether, are known as altcoin. There are more than 8,600 cryptocurrencies in circulation.

The team sold its positions after McAfee’s tweets sparked short-term price increases, the U.S. claims. From December 2017 to January 2018, it earned more than $2 million from these activities, while the long-term value of the cryptocurrencies they promoted “declined substantially,” prosecutors said. In addition, the U.S. alleges, the team used the Twitter account to support ICOs without disclosing the promotion payments, reaping more than $11 million.

McAfee Corp., based in San Jose, California, was acquired by Intel Corp. in 2010. In 2016, Intel announced an agreement to transfer a 51% stake in McAfee to the investment firm TPG for $1.1 billion. The transaction valued the spun-off company at $4.2 billion, including debt. The company returned to the market in an initial public offering in October. The U.S. didn’t allege any wrongdoing by McAfee Corp.

Bitcoin’s Latest Plunge Highlights the Dangers of a Crypto Salary

When was the last time your entire paycheck shrank by more than 20%?  If you…