Bitcoin sanctions could be next, but most Russians won’t care 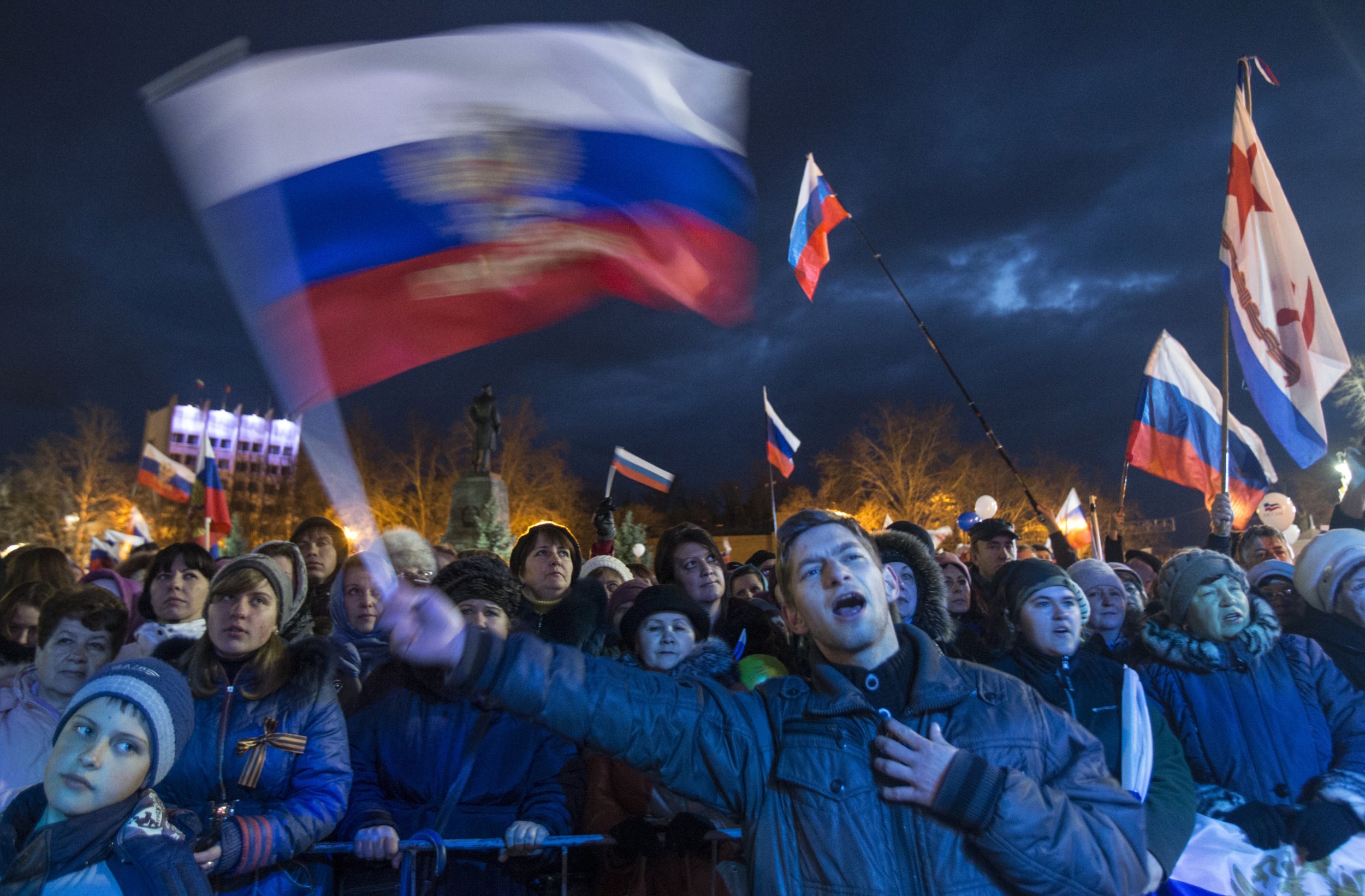 As Moscow’s war on Ukraine rages on and the Russian economy and currency spiral to new lows, Washington is reportedly trying out a new way to dial up the pressure on Putin: sanctions targeting cryptocurrencies like bitcoin and Ethereum.

The Department of Justice announced early Wednesday a new task force broadly designed to enforce sanctions. As part of that, it will target efforts to use cryptocurrency to evade U.S. sanctions, launder proceeds of foreign corruption or evade U.S. responses to Russian military aggression.

Taking aim at Russia’s access to digital cash comes as the U.S. and its allies, including notoriously neutral Switzerland, levy heavy punitive measures against Moscow.

The concern is that the Kremlin, as well as other ancillary actors supporting the offensive on Ukraine, will evade the sanctions regime via digital tokens, which are not owned or issued by a central authority like a bank. Bitcoin, like most cryptocurrencies, is decentralized and borderless, which means that it doesn’t respect national boundaries. Because there is no central authority to block transactions, digital currencies are also resistant.

Since Russia invaded Ukraine on Feb. 24, stats from crypto data provider Kaiko show that transactions on centralized bitcoin exchanges in both the Russian ruble and the Ukrainian hryvnia have surged to their highest levels in months.

This is likely part of the reason why Ukraine asked all the top crypto exchanges to ban Russian users — a request that has been rejected by many major players, who argue a move like that would go against the very reason why cryptocurrencies exist.

Despite growing signs of crypto adoption — as well as dialed-up rhetoric from world leaders about banning sanctioned Russians from digital currency exchanges — crypto as a pathway to sidestepping sanctions isn’t really a viable option at scale.

First of all, crypto markets offer thin liquidity and token transactions are, by design, traceable via a public ledger known as the blockchain. Aside from that, experts tell CNBC that ultimately there are better and smarter ways than using bitcoin to get around global financial blockades.

“The size and scale of crypto markets — and their state of liquidity — is not sufficient enough to offset what happens from banking disruptions and other disruptions from sanctions,” said Yaya Fanusie, a fellow at the Center for a New American Security who assesses national security and money laundering risks related to digital assets.

“It’s akin to, if someone were to block your paycheck for a month and then you had to rely on your piggy bank to make up for it,” he said.

Russia is no stranger to sanctions

Russia is no stranger to sanctions, and its political class has spent years getting creative on workarounds.

Moscow faced international condemnation in 2014 after Russia annexed the Crimean peninsula in Ukraine. That was also the year that a passenger plane headed from the Netherlands to Malaysia was shot down by a Russian-made surface-to-air missile fired over territory held by pro-Russian separatists in eastern Ukraine.

Since then, President Vladimir Putin has built buffers to insulate Russia from the blowback of Western sanctions, which economists estimate has cost Russia $50 billion a year.

Typically, the way sanctions work is that a government generates a list of the individuals and companies that must be avoided, and those doing business with these banned entities are subject to heavy fines. But sanctions are only as good as the KYC (Know Your Customer) onboarding requirements, explained Sarah Beth Felix, an authority on anti-money laundering and sanctions compliance.

“Depending on how strict that is, then that drives the data, which drives whether or not the sanctions are actually effective,” Felix says. “That is agnostic when it comes to the underlying flow of funds, whether it be crypto, fiat, wires, payable-through accounts — it all lives or dies on the underlying data that’s captured and verified on the ownership of the company, the individual, and all that kind of stuff.”

Part of Putin’s strategy involved diversifying away from U.S. treasuries and the U.S. dollar, cultivating a new kind of debt structure largely based on euros and gold. Putin’s war chest includes $630 billion in foreign reserves, which serves as a sort of financial shield meant to dull the impact of sweeping sanctions.

The country’s underlying financial fundamentals have also helped to absorb the shock. CNBC has reported that Russia has a debt-to-GDP ratio of only 18%, a current account surplus, and the price of oil surging past $113 a barrel (its highest level in more than a decade) is certainly a boon. Thus far, the White House has steered clear of sanctioning Russian oil sales.

Moreover, experts tell CNBC that Russians have been bracing for this kind of crackdown for months.

“Russia’s elite and financial authorities have been preparing for sanctions for some time,” said Salman Banaei, head of public policy for North American for Chainalysis, whichspecializes in tracking activity on blockchain networks.

Any movement of funds likely happened prior to Russia’s invasion, Felix agreed.

“I would assume billions and billions of dollars already moved through these front companies and shell corporations that we have around the world that are owned by Russian businesses and individuals, regardless of whether it involved crypto or normal bank-to-bank wires,” said Felix.

Banaei agrees that it is unlikely that designated persons would opt to move around large quantities of crypto at this point. Instead, Banaei says that if cryptocurrency is being used to evade sanctions, it likely would have happened slowly, over the past several months.

“At the end of all of this, the glaring, massive gap that we have is in the transparency of who owns what companies, not just in the U.S., but around the world,” explained Felix.

Even if Russia wanted to use crypto to evade sanctions, its economy is too big, the crypto market is too small, and any huge transactions would likely be flagged.

“The size of crypto markets is small compared to what’s happening in the banking sector,” said Fanusie.

The U.S. has placed new debt and equity restrictions on some of Russia’s most critical state-owned enterprises with estimated assets of nearly $1.4 trillion. These entities won’t be able to raise money through the U.S. market, a critical source of capital. The total cryptocurrency market cap is at around $1.9 trillion.

Cryptocurrencies are also thinly traded, which means that it can prove difficult to buy large swaths of digital tokens like bitcoin. The bitcoin-ruble pair maxes out at about $250,000 per trade on Binance, the world’s biggest cryptocurrency exchange,versus the bitcoin and U.S. dollar pairing, which has a maximum market order of around $2.6 million.

Delston tells CNBC that the size of the transactions that the Russian government would need to conduct would be multiples of what individual Russian citizens might be doing right now. Not only would that prove difficult to do in terms of liquidity limitations, but it could also red flag the transaction entirely.

“On the blockchain, the size of the transaction is immediately available, and very sizable transactions would be very apparent to anyone looking,” Delston said, who added that cryptocurrencies aren’t the bastion of anonymity they are so often made out to be.

While crypto has the advantage of not involving wire transfers from bank to bank (which are heavily policed to ensure sanctions compliance), every transfer ever made is captured on a public, permanent, and immutable blockchain ledger and can be traced in nanoseconds.

“If I hand you find a $5 bill, you can never trace that back to me, where if I were to transfer you money through my wallet, that’s always linked back to my wallet ID, which if I went through a regulated exchange, has all of my CIP (Customer Identification Program) information,” explained Felix.

Chainalysis’ Banaei tells CNBC that a single tip in the cryptocurrency market can, within hours, uncover a network of wallet addresses involved in ransomware fraud and money laundering, while a similar tip relating to a traditional bank wire could take several months to reach a similar level of visibility into a criminal network and its money laundering.

While there are privacy tokens like monero, dash, and zcash, which have additional anonymity built into them, they tend not to be as liquid as other tokens, since many regulated exchanges have chosen not to list them due to regulatory concerns.

There is also the question of what to do once you have the crypto in hand.

“It’s hard to buy stuff with cryptocurrency, especially big stuff,” Delston tells CNBC. He says that he doesn’t know of any major electronics companies, food exporters, or spare parts manufacturers that accept cryptocurrency as payment, which he notes are “all the kinds of things that a country like Russia would need, because it doesn’t produce it on its own.”

And while historically crypto exchange compliance with the global sanctions regime hasn’t been great, Fanusie says it’s actually getting much better, as these platforms beef up their internal compliance teams.

What about a digital ruble?

While a lot of attention goes to the potential for bitcoin to facilitate sanctions evasion, the bigger story to Fanusie is what sanctioned actors are doing with central bank digital currencies, or CBDCs.

The Bank of Russia released a consultation paper for a “digital ruble” in October 2020, and Central Bank Governor Elvira Nabiullina said the country plans to prototype and pilot it this year.

The digital ruble would be a virtual version of the country’s national currency that — similar to China’s digital yuan — would be controlled centrally by the Bank of Russia and use some form of distributed ledger technology.

At the time it was first announced, a Moscow newspaper, citing officials, said a digital ruble would both reduce dependency on the dollar, as well as mitigate exposure to sanctions.

Well before the Russian invasion of Ukraine, former U.S. Treasury official Michael Greenwald told CNBC that a digital ruble could prove problematic for the U.S.

“What alarms me is if Russia, China, and Iran each creates central bank digital currencies to operate outside of the dollar and other countries followed them,” he said. “That would be alarming.”

Van Gogh, Monet—And Beeple? As NFTs Exploded One Of The Most Expensive Art Pieces Sold In 2021 Was Entirely Digital

Everydays: The First 5,000 Days, a piece of digital artwork, finds itself alongside paintings made…

How Bitcoin will conquer the world

Is India Banning Cryptocurrency? How Can It Do That?