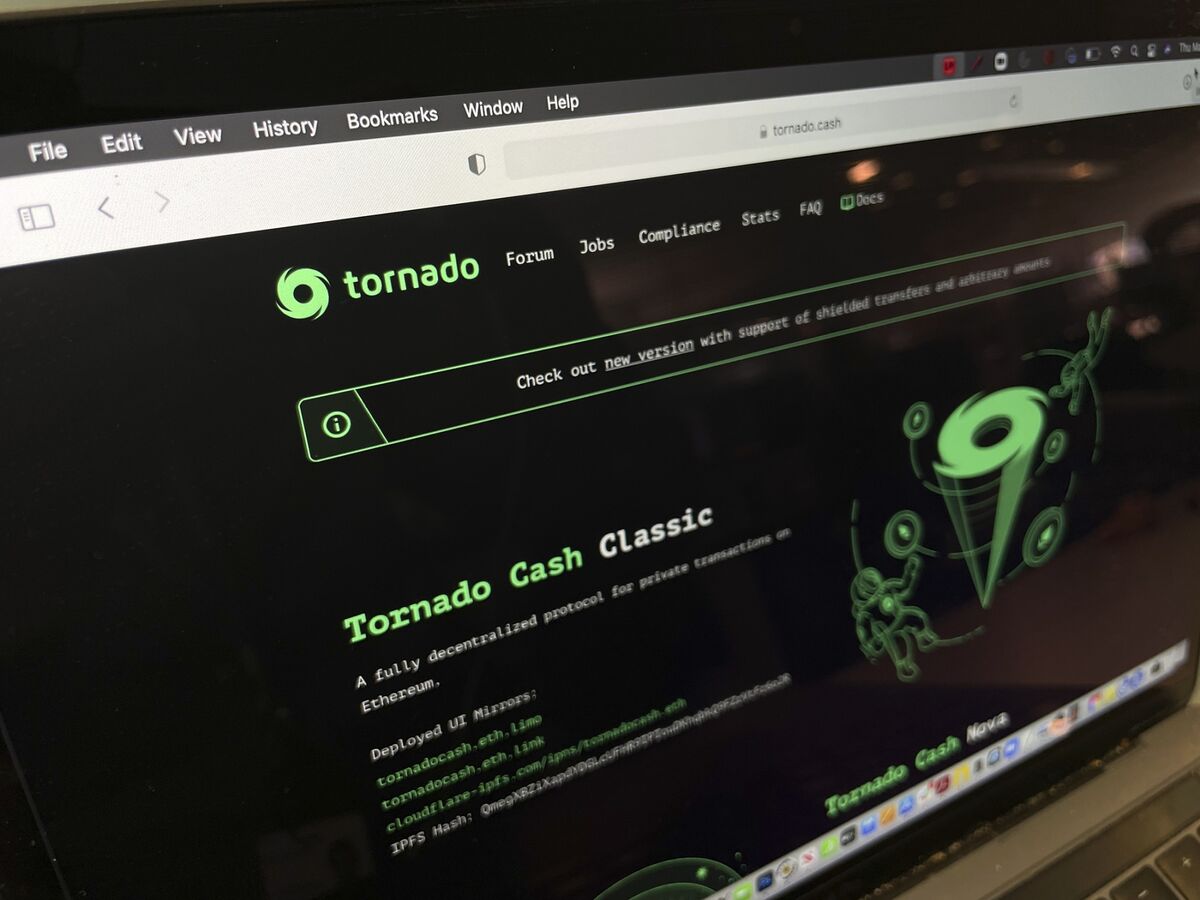 One of the founders of Tornado Cash, among the most popular services to obfuscate cryptocurrency transactions, said it doesn’t need to comply with sanctions being imposed in the wake of Russia’s attack on Ukraine.

Designed to preserve privacy, the protocol does this by breaking the link between the sender and receiver’s addresses on transactions sent over the Ethereum blockchain. The project is smart contract-based, meaning that decisions are made by pre-written software programs instead of individuals.

It also doesn’t provide any custodian services or have a centralized host for its website. Individuals can access Tornado Cash by using the Ethereum Name Service, a distributed naming system without any login information, which the co-founder says helps make it impossible to police users.

“We don’t have more access to it than any other users” of the protocol, Roman Semenov, one of three founders of Tornado Cash said in an interview from Thailand. “There’s not much we can do.”

Regulars may not see it the same way. According to guidance from the multination Financial Action Task Force, the protocol likely falls under provisions covering virtual asset service providers, legal observers said. Creators and individuals that “maintain control or sufficient influence” in the application are likely required to have compliance controls in place, including sanctions compliance, even if the project is considered decentralized.

“What FATF says is ‘hey, we don’t care what you call yourselves, decentralized or DeFi, what we care is what you are doing,’” said Ari Redbord, head of legal and government affairs at blockchain intelligence firm TRM Labs.

Tornado Cash has seen rapid growth over the last year to become one of the most popular crypto mixers. The monthly value of Ether sent to Tornado Cash peaked in November as crypto markets set record highs, according to data compiled by Crystal Blockchain.

The value surpassed that of Bitcoin sent to Wasabi wallet, another similar protocol used to mix Bitcoin transactions. The growth is significant since price of Ether is much lower than Bitcoin in dollars.

Nicolas Smart, director of blockchain intelligence and data at Crystal, said Tornado Cash’s dominance has increased in part because of the growing popularity of DeFi, which has resulted in more crypto wallets holding greater amounts of wealth.

Tornado Cash, founded in 2019, is probably best known for its use by questionable actors in the crypto space — whether it is hackers who swiped $34 million from Crypto.com in January or the crypto personality “Sifu” involved with the Wonderland project who turned about to be the co-founder of the failed crypto exchange QuadrigaCX.

Semenov doesn’t seem to be concerned about his and his partners’ stance despite rising regulators’ attention in crypto-focused sanctions.

“All we do is write code and publish it on GitHub,” he said. “This is pretty close to the definition of free speech so writing code cannot be illegal.”

In a sense, the Tornado Cash co-founders are working in a decentralized way. While Semenov is based in Dubai, the other two are in Amsterdam and Seattle, respectively, he said. Semenov declined to comment on his nationality.

“According to FinCEN guidance of 2019, in the case of Tornado Cash, contributors fall under the “anonymizing software providers” definition, which excludes them from money transmitter regulations, Semenov said. “We comply with all U.S. regulations regardless of our citizenship.”

Still, there has been a crackdown on crypto mixers. Last year, U.S. authorities arrested the founder of Bitcoin tumbling service Bitcoin Fog. The owner of Helix, another Bitcoin mixer, pleaded guilty for helping criminals launder money. Unlike Tornado Cash, Semenov said many Bitcoin mixers are considered illegal because the services were custodial, meaning that they held users’ funds at one point.

TORN, the native token of Tornado Cash, has more than doubled since hitting an all-time low in January. The price is down about 8.8% in the past 24 hours, according to CoinGecko.

As the governance token of Tornado Cash, TORN gives its holders voting rights to decide the protocol’s upgrades and other developments. The recent price surge was partly due to a change that provided an incentive to TORN holders to stake or commit their tokens to the protocol’s smart contract for extra token rewards, Semonov said.

Other privacy-focused tokens have also posted recent gains. Zcash’s price was up by more than 23% in the past week, according to TradingView and Binance.

Paris Hilton surprised the entire Tonight Show audience with free NFTs during her guesting. As…