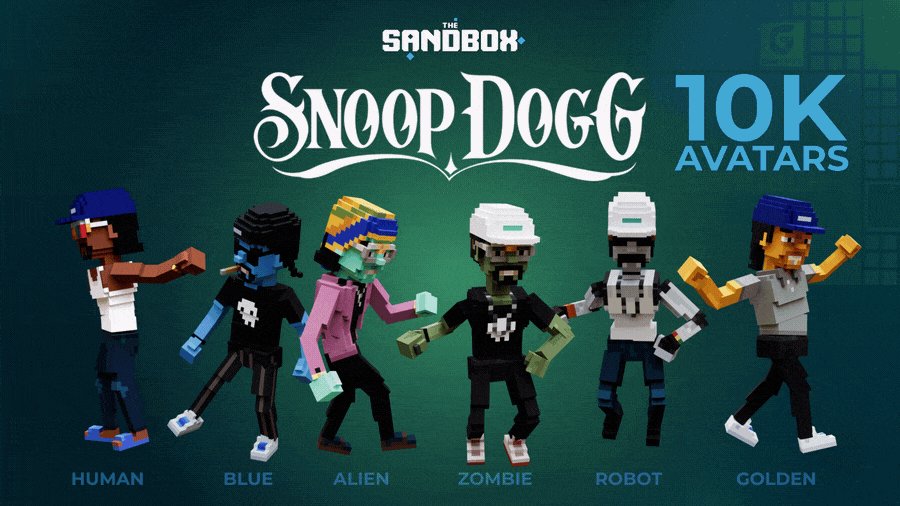 The Sandbox, one of the most popular blockchain-based metaverse game experiences, is about to launch 10,000 Snoop Dogg avatar NFTs on February 22, 2022, prior to the opening of the Alpha Season II. It’s a great news for both Snoop Dogg fans and The Sandbox lovers.

The 10,000 Snoop Dogg avatars are programmatically generated, voxelated NFTs which contains over 150 traits.

Each uniquely cool Doggie avatar can be playable in the second season of the game to attend events and concerts, complete quests, hang out with friends and explore the metaverse like a celebrity.

Imagine going to a Snoop Dogg concert in a funky Doggie avatar or appearing in a music video filmed entirely inside The Sandbox!

The 10,000 Snoop Dogg avatar NFTs are divided into seven rarity tiers – Human, Blue, Alien, Zombie, Dogg, Robot and Golden. While two-thirds of the Doggies will be common, there will be three types of uniquely designed Doggies with special traits and features to make them stand out of the Doggie crowd.

The “dope avatars” is a set of dope, fresh and funky Doggies designed by the teams at The Sandbox and Snoop Dogg himself. Each one is unique and one of its kind.

The “classic avatars” is a set of Doggies created based on the history of Snoop Dogg. From these exclusive Doggies, you can easily identify some of Snoop’s greatest tracks throughout the years. One of them is the velvety elegant look of Snoop’s 2007 anthem, with sensual seduction, in the intoxicating soulful retro 80’s vibe.

The “signature edition” is a set of Doggies that are completely out of the box. Teamed up with some of the greatest creators in the metaverse, the signature Doggies look like Snoop has been returning from an interstellar, multi-dimensional journey. What does that mean? You need to visit the official site to get an idea.

How You Can Get a Doggie Avatar

The release of the Snoop Dogg avatar collection is scheduled on February 22, 2022. That is 22-02-2022, a very memorable date for the drop. For those who already purchased and hold the exclusive Snoop NFTs such as the Snoopverse Early Access Pass, Snoop Party Pass, JADU Jetpack, JADU Hoverboard, SupDucks, and FLUF Burrow, they will get a chance to mint the Doggies 24 hours before the public release.

Every Doggie will be minted and sold for 150 SAND per NFT. For those who have completed the Alpha Release in December and received any of the generous 5,000 SAND as a reward from the game, it’s going to be a no-brainer to spend the SAND in the most cool way possible. More status update on the Doggies collection can be found on Twitter and Discord.