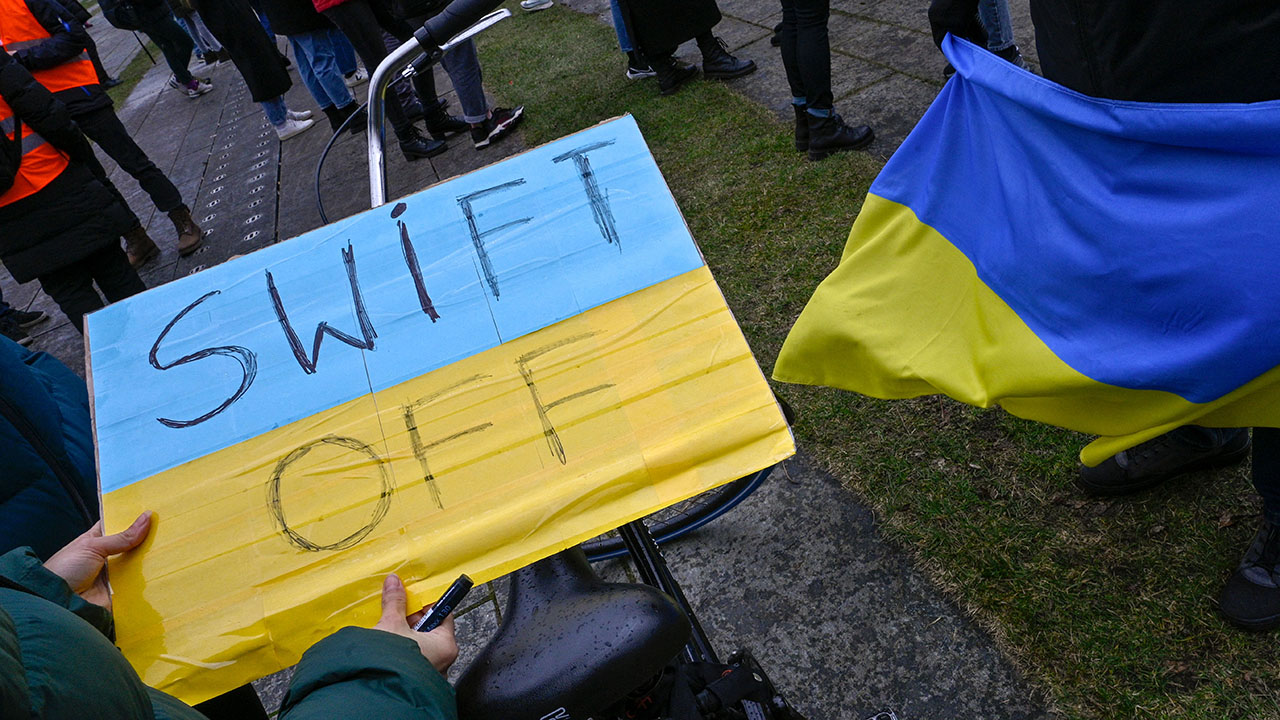 In an effort to sanction Russian President Vladimir Putin for invading Ukraine, a little-known, but incredibly powerful organization known as SWIFT has entered the zeitgeist. Without it, banks around the world wouldn’t be able to do business with each other.

But even before the acronym, short for the Society for Worldwide Interbank Financial Telecommunications, became widely known, competitors had emerged to try to break its monopoly on cross border transactions between banks.

SWIFT also partners with central banks including the Bank of England, the European Central Bank and the U.S. Federal Reserve System. Efforts to replace the inter-bank messaging platform have been mounted by crypto nerds and rogue nations alike.

Among the earliest attempts was by San Francisco-based Ripple, founded in 2012 as a digital assets company, commonly associated with the XRP cryptocurrency and valued at $15 billion.

In 2016, the firm hired SWIFT board member Marcus Treacher as its global head of strategic accounts and the following year, 2017, it launched RippleNet as a messaging platform similar to SWIFT before layering on transaction settlement using digital assets in 2018. Since its inception, RippleNet has openly billed itself as a competitor to SWIFT.

While RippleNet has had difficulty holding onto its high-profile early users, RippleNet general manager Asheesh Birla says that the network has seen a record year with a run rate over $10 billion, about half of which is moving crypto products known as on-demand liquidity.

While numbers vary wildly, SWIFT conducts about $1.7 trillion worth of volume a day. Birla comes from a Silicon Valley background and views his company’s ledger offering for cross border transactions, similar to a blockchain, as less of a decentralization play and more as a market improvement.

“It took banks 20 plus years since the internet to start waking up, but they need to also modernize their technology stack to compete,” Birla says.

Taking down a global financial juggernaut has not proved easy. Ripple is currently being sued by the Securities and Exchange Commission over whether XRP is a security. While that case remains outstanding, Birla sees it’s resolution as a potential boon for RippleNet, which does not share the same renegade ethos associated with crypto startups and actually sees its potential product as even more suited for centralized actions like sanctions.

“In the case of SWIFT, a lot of countries had to really bind together to freeze assets,” he says. “If money moves in real time, like it does with these more modern payment solutions built on crypto, you can cut them off right away.”

Despite prognostications that crypto would explode in use from Russians trying to evade sanctions, Birla is skeptical that the volume of trading available could begin to reach the $50 billion in FX trading that Russia engaged in daily before the sanctions. He also points to the fact that exchanges are mostly regulated, unlike the perception of some pirate system.

Pelle Braendgaard, CEO of crypto compliance app Notabene, pointed out that even with the limits on scope, cryptocurrency “can and has been used by rogue nations as a vehicle for evading sanctions and engaging in illicit finance and money laundering activities but it is not easy to do at scale.”

Make no mistake, with Russia cut off from SWIFT, workarounds won’t be simple. In order to use another form of financial intermediary, both parties would have to agree to that avenue. While it may be easy for Russia to move its business with allies onto another set of rails, that list of sympathetic counterparts is not long.

While RippleNet wouldn’t help Russia circumvent sanctions, the country itself, as well as some neighbors, are working on potential workarounds.

Just days after several Russian banks got the boot from SWIFT, the head of Central Bank of Russia, Elvira Nabiullina, pitched the Financial Message Transfer System of the Bank of Russia, which was specifically billed as a replacement for SWIFT.

The Bank of Russia first launched this SWIFT alternative in 2014, the same year that Russia invaded Crimea and restrictions on Russia were first debated. Originally intended for domestic use, by April 2021 it had partners in countries sympathetic to the Russian point of view including Belarusian Banks, Armenia-based Arshidbank and Kyrgyz Bank of Asia in Kyrgyzstan.

According to reports from Russian News Agency TASS, which is state-owned, there are also negotiations underway with Chinese banks. Putin and Chinese President Xi Jinping were rumored to have been in touch prior to Russia’s invasion and have both looked for avenues to avoid the dominance of western democracies on the global stage.

The Chinese have hinted at their own efforts to circumvent SWIFT, with China Construction bank having built BC Trade 2.0, which allows 75 financial institutions to identify risky borrowers and offer lower rates to better candidates.

As of Feb. 2021, that platform had facilitated over $100 billion of loans to thousands of users and notably cuts out SWIFT, as reported in the Forbes Blockchain 50. Similarly, in 2019, Venezuela launched the petro, a digital currency purportedly backed by the nation’s vast oil supply and built to circumvent sanctions. As a result, it was promptly banned by former President Donald Trump.

Weaponizing SWIFT has been bandied about in the past, before it was used in sanctions last week. In 2018, President Trump wanted to cut off Iran’s access despite disagreement from European allies. Ultimately, SWIFT cut ties with the Iranians in order to avoid violating sanctions.

Bitcoin Drops Below $42,000 to Lowest Level Since September

Bitcoin continued a weeks-long drop on Friday, falling below $42,000 to levels not seen since…