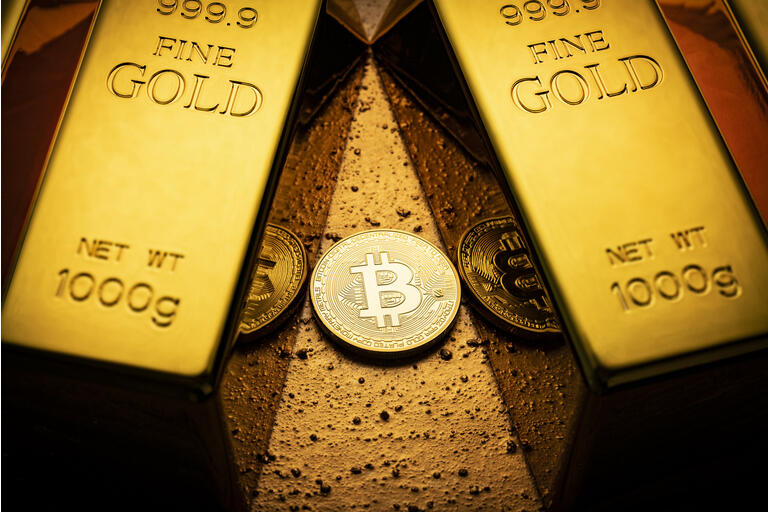 Look no further than bullion to get a sense of how an historically unusual constellation of global risks is rippling through markets.

Prices have surged to the highest since the start of June on escalating tensions between Russia and the West over Ukraine, and a spike in U.S. inflation to the strongest in decades. At the same time, real interest rates — a key driver of gold — have jumped this year, countering the typically inverse correlation between the two.

And in the battle over whether Bitcoin is a better modern-day store of value than bullion, the cryptocurrency is losing out, at least for now.

“Geopolitical risks have materialized and are escalating,” said Nicky Shiels, head of metals strategy at MKS PAMP SA, a trader and refiner of precious metals. “Gold at $2,000 is a higher probability in the near term, versus $1,800.” The metal traded around the middle of that range on Wednesday.

U.S. President Joe Biden unveiled sanctions this week targeting Russia’s sale of sovereign debt abroad and the country’s elites, after Vladimir Putin recognized two self-proclaimed separatist republics in eastern Ukraine as independent, a dramatic escalation in the standoff. Biden described the move as the start of Russia’s invasion of its neighbor, but Moscow has denied any plans to invade.

Before demand for a haven took off over Ukraine, bullion’s resilience had been a mystery to some observers, especially in the light of the Federal Reserve’s imminent tightening cycle.

One concern was that the U.S. central bank could run the risk of triggering a recession by increasing rates more frequently and to a higher level than potentially needed to tame inflation.

“What’s really driving gold is a sense that the chances of a policy error are increasing with the Fed,” said Ross Norman, chief executive officer of Metals Daily, an information portal focusing on precious metals.

“There’s a sense that the Fed is behind the curve, and when you have to play catch up, you have to put a fairly aggressive move forward in terms of rate-hiking, which a fragile economy may not be well positioned to adjust to.”

Gold is also benefiting from some weakening in demand for cryptocurrencies, which are often seen as an alternative “fiat hedge,” according to Peter Berezin, chief global strategist at BCA Research Inc. Bullion has gained more than 3% this year, while Bitcoin has plunged 16%.

Bullion had a largely lackluster 2021 after charging to an all-time high the year before on the back of ultra-accommodative monetary policy and pandemic support. Now, a rate liftoff is all but certain in March, and JPMorgan Chase & Co. economists estimate increases of 25 basis points at nine consecutive meetings. This could weigh on bullion, an asset that bears no interest.

“Gold traders have never lived through a rate hiking cycle amidst high inflation since the 1970s,” said Shiels from MKS PAMP. “There’s a lot of uncertainty over how this plays out: hiking cycles aren’t necessarily bearish for gold and it depends how real rates respond. At the end of the day, gold doesn’t control its own fate which is the added complexity.”

Rising global risks have not been lost on investors who’ve piled into exchange-traded funds backed by bullion. As of Feb. 18, holdings in SPDR Gold Shares had surged by slightly more than 50 tons from a 20-month low in December.

Other supportive drivers for bullion include physical demand from China and India and the possibility of undisclosed central bank purchases.

The biggest consuming countries are back in full force after an abysmal 2020. Shipments to China from Switzerland, Europe’s key refining hub, jumped almost fivefold in January to a five-year high.

Imports by India accelerated to the strongest level in a decade last year as jewelry sales almost doubled, with the demand outlook remaining bright, according to the World Gold Council.

Meanwhile, central banks added 463 tons of gold to reserves last year, an increase of over 80% from a year earlier, according to the council, which added purchases will continue but at a slower pace.

The central banks of Russia and China could look to buy gold in the open market and support prices when real yields spike, Citigroup Inc. said in a Feb. 17 note. “We think this has already materialized in 2022, but might not be reported in data yet,” the bank said.

Still, the question remains — can gold sustain levels around $1,900 an ounce when or if geopolitical tensions ease? UBS Group AG’s wealth management unit said in a note last week that “a break in the negative correlation between gold and U.S. real rates never really endures, and this time is no different.”

— With assistance by Joanna Ossinger, and Sunil Jagtiani. Read full story on Bloomberg

Cryptocurrency exchange FTX, which recently topped a $25 billion valuation, purchased an ad in the annual U.S.…