How To Prepare For Hyperinflation 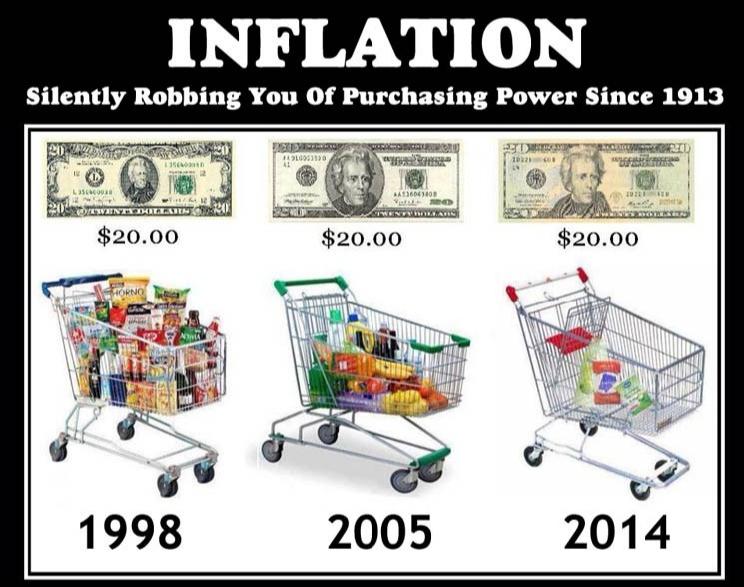 It’s been two years since central banks issued trillions in fiat currency in response to a global pandemic, and now another destructive force has reared its ugly head: inflation.

Today, the U.S. is grappling with its highest inflation reading in decades, and many of us — especially younger generations — are getting a crash course in economics as prices continue to rise. It’s natural to wonder if the future will become even more extreme with a hyperinflationary collapse.

Hyperinflation can be scary for those who haven’t experienced it before. Luckily for us, there are some parallels, both historical and in the present day, that can help us prepare and weather the storm if it comes.

Inflation is an overall rise in prices. It has more or less been accepted as inevitable with fiat currency, and central banks have normalized inflation to some degree.

Hyperinflation is runaway inflation with a sense of panic. Often, some external event occurs, such as war, uprising, or a global pandemic. A government will fund its crisis response with debt it can’t reasonably service, and print more money to cover the difference.

Prices rise parabolically, which prompts consumers to panic-buy anything that will hold value and thus create massive shortages. Governments print more money to try and counter the effects, and it all becomes a vicious cycle.

What constitutes hyperinflation is subjective, but economists tend to favor Phillip Cagan’s definition of a monthly price increase of at least 50%. In fact, there have been some instances that far surpassed that figure. In Zimbabwe during 2007-2008, prices doubled in about a day, according to the Cato Institute.

When hyperinflation hits, you are incentivized to spend your devaluing currency into anything that is a better store of value. In extreme cases where prices are doubling in a matter of days, almost anything non-perishable becomes a store of value. For example, it’s probably better to buy a couch and store your value in it than in the currency.

Writ large, hyperinflation means the deterioration of market economies because time preferences surge. Each consumer is incentivized to spend their money as soon as they receive it.

Often, people will look to swap the currency for another nation’s currency, but this can become untenable. Once the government catches on, capital controls can be implemented. Forex trading could be made illegal, or at least less advantageous, in an effort to prop up the failing currency. Most recently, Russia imposed a 30% tax on foreign currency purchases. We’ve even seen “smoke and mirrors” currency swaps where a nation redeems the currently issued currency for an even more devalued version.

Bitcoin is one alternative that could prove to be useful in hyperinflation. Designed with a hard cap of 21 million BTC (which amounts to a total of 2.1 quadrillion subdivisible units,) I consider Bitcoin to be far more resistant to hyperinflation than any other currency. Bitcoin is a decentralized bearer asset like gold, making it much harder to seize.

But unlike gold it is far more salable and can be sent to anyone in the world for a relatively low cost. It could come in handy if you need to evade capital controls in a hyperinflationary collapse. It might make sense just to get some in case it catches on.

Focus on the Bare Necessities

During hyperinflation, every day your money goes unspent, you’re losing some of it. Once purchasing power evaporates, it’s gone for good. You’re better off proceeding with major purchases sooner rather than later in hyperinflation because if you don’t, those items will become more unattainable over time.

If you’re fortunate enough to live in a stable economy, it can be hard to envision what this sort of shopping looks like. Expect long lines at ATMs, empty shelves at grocery stores, and an uptick in crime.

As you shop, stay focused on the bare necessities you need to survive, such as food. You’ll likely want to buy food with a long shelf life so that you can buy a larger quantity without having to worry about spoilage. If you make a discretionary purchase, give extra consideration to items that will likely become scarcer and thus potentially be resold later at a higher price. You never know what the future holds.

As Warren Buffett likes to say, don’t ask the barber whether you need a haircut. You can’t expect to get an unbiased opinion from people who have an economic incentive to deceive you.

Governments create hyperinflation by printing money to less and less avail. They print it because it is more politically expedient than raising taxes. So, if you’re looking at inflation statistics produced by a government agency staffed with political appointees, take them with a grain of salt.

For instance, the Consumer Price Index, maintained by the U.S. Bureau of Labor, is constantly changing. Reported changes are posted on the bureau’s website, and the notices often beg more questions than they answer. You can easily visualize the difference between today’s CPI algorithm and the one used decades ago at shadowstats.com.

“Starting in January 2022, weights for the Consumer Price Index are calculated based on consumer expenditure data from 2019-2020,” the bureau wrote in a February notice. “The BLS considered interventions, but decided to maintain normal procedures.”

As a security expert, I encourage clients to independently verify information rather than rely on third parties. If you suspect you’re in a hyperinflationary environment, it’s more apt to calculate how inflation is affecting you specifically. Keep your receipts for common purchases and compare them. Adjust for other changes such as shrinkflation, where vendors alter the unit of sale to conceal price increases.

Inflation is a complicated phenomenon with many factors, such as supply shocks. But if you verify on the street, you’ll have a better idea of how inflation is affecting you because at least you’ll know the methodology.

Have an Exit Strategy

There are only two choices for responding to threats: fight or flight. When you have a good chance to bring about change, it can make sense to resist more overtly. But when you know winning is the longest of long shots, the smart move might be to avoid confrontation altogether and go somewhere else.

Hyperinflation is a systemic problem, which makes it nearly impossible for individuals to move the needle. Ultimately, you can’t really fight hyperinflation; the best you can do is adapt and avoid its effects as much as possible.

If you figure out how to live with hyperinflation, trouble could be waiting on the other side, too. Hyperinflation squeezes entire communities, and desperate people do desperate things. For this reason, hyperinflation has been cited for prompting unrest, mass poverty, and war.

In all of these edge cases, it may not be in your best interest to stick around. If you’re a well-known Bitcoiner and Bitcoin proves to be a successful inflation hedge, you could experience some contempt and even become a target. Should that happen, get out while the getting is good.

Wealth security is about anticipation. Markets are the aggregate of human decision-making, and human nature is relatively predictable. If you keep an eye on your economy and develop some flexibility and resourcefulness, hyperinflation won’t extract as high a price from you.

Investment
Previous ArticleBitcoin Is Showing The Power Of Decentralized Money
Next Article Can the Kremlin use crypto to evade sanctions? Doubtful, experts say

A community of cryptocurrency enthusiasts, called friesDao, plans to buy at least one restaurant from…

Bitcoin Resumes Slide After Breaking Back Below $50,000 Level