What is Solana – One Of Ethereum’s Major Rivals 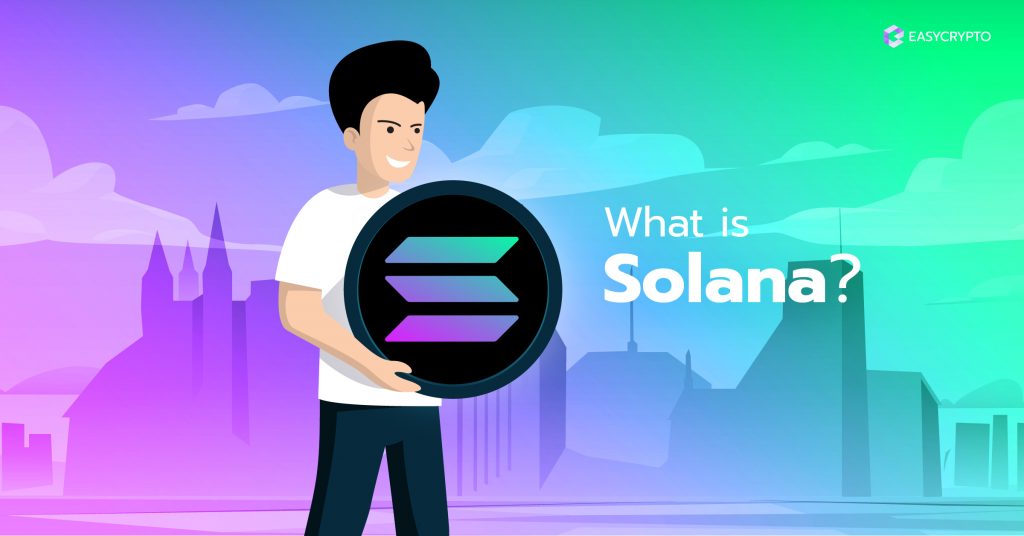 The cryptocurrency market has been in a bearish trend for the past few weeks. Bitcoin has lost its position above the $50k mark, while Ether has been unable to surpass the $4k mark over the past few months.

Despite the bearish trend in the market, one of the cryptocurrencies that stood out is Solana. Solana (SOL) reached a new all-time high above $200 at a time when the other major cryptocurrencies were suffering massive losses. This unusual movement in price grabbed the attention of many traders, investors, market participants, and people outside the cryptocurrency space.

As one of the leading cryptos in the world, it is not a surprise that many people want to learn about Solana and why it pumped when other cryptocurrencies were losing their value. This post looks into the Solana basics and explains its rally a few weeks ago.

What Is Solana?
The first obvious question is what Solana is. Solana is a blockchain platform specifically designed to host decentralized applications. It is similar to other leading dApp blockchains like Ethereum and Cardano.

However, Solana is an open-source project currently run by the Geneva-based Solana Foundation. The blockchain was built by developers at San Francisco-based Solana Labs. Solana has gained traction by offering something that the Ethereum blockchain has so far being unable to deliver; faster operation and lower transaction fees.

Unlike Ethereum, Solana is a PoS (proof of stake) blockchain, making it more environmentally friendly than the popular PoW (proof of work) blockchains like Ethereum and Bitcoin. It has a naïve coin called Solana and has the ticker SOL.

The proof of stake protocol used by Solana is currently preferred in the cryptocurrency space. Unlike the proof of work where massive energy is needed to run a blockchain, proof of stake makes the validator nodes on the network to stake something. In the case of Solana, the validators stake the SOL tokens. Although the validators also consume power to operate, their power consumption is far lower than that of the PoW miners.

Programmable blockchains are very popular within the cryptocurrency space and beyond due to their massive functions and potential. They have the ability to store tiny pieces of code known as smart contracts. Smart contracts can be programmed to execute certain actions when the conditions of the contract are met.

For instance, if you rent a car, the dealership might initiate a smart contract that automatically pays back your deposit when you return the car in good condition. Ethereum was the first and remained the leading programmable blockchain in the world. Over the past few years, the Ethereum blockchain has attracted a wide range of developers who use it to build decentralized applications (dApps).

However, the Ethereum network continues to fall short in certain aspects, especially in terms of scalability. The network congestion sometimes leads to huge fees. The developers are currently working on ETH 2.0, migrating the blockchain from a proof of work to a proof of stake protocol.

The ETH 2.0 upgrade is expected to solve the scalability issue and make Ethereum have a lower carbon footprint.

Due to Ethereum’s shortcomings, new programmable blockchains have come up and are taking some of Ethereum’s market share. The likes of Solana, Tezos and Cardano are designed to be cheaper, faster, and more sustainable than Ethereum. Solana is now the fastest of them all.

How Does Solana Differ From Ethereum?
Ethereum is currently the leader in the smart contract space, with over 70,000 nodes compared to just 1,000 for Solana. However, Solana is considered to be an Ethereum killer because of its innovation and how it is tackling some of Ethereum’s weaknesses.

Solana, through its proof-of-history (PoH) protocol, is revolutionizing how blockchains work. By allowing validators to be in charge of their own clock, the transaction verification process is reduced since the nodes don’t have to put in processing power before they can verify various timestamps.

In addition to the transaction speed, the costs are significantly lower on the Solana blockchain. As mentioned above, one of Ethereum’s major challenges is its high gas fees. Users pay up to $50 to process a transaction on the Ethereum network.

Earlier this week, Bitfinex paid $23.7 million just to move $100,000 USDT on the Ethereum network. With Solana, the fees are significantly lower, usually around $0.00025 per transaction.

How Fast Is Solana?
Solana is currently one of the fastest programmable blockchains in the world. It can process more than 50,000 transactions per second (TPS). The developers say the transaction speed can reach 700,000 TPS as the network grows. This is far better than Ethereum, which currently processes between 15 to 45 TPS.

Solana’s speed and low transaction fee have attracted numerous developers to the blockchain. A wide range of dApps and smart contract projects are now deployed on the Solana project. Thus, making it one of the most widely-used blockchains and cryptocurrencies in the world.

Coins Supported By Solana Blockchain
The Solana blockchain is becoming home to a wide range of cryptocurrencies. Some of them include;

Why Did Solana Pump When Others Were Dumping?
There is no denying the fact that Solana (SOL) is one of the best-performing cryptocurrencies this year. SOL has forced its way into the top ten cryptocurrencies by market cap, surpassing the likes of Dogecoin and Polkadot and also competing with XRP in terms of market cap.

Although its price is now slightly above $170, Solana reached a new all-time high at $213 on September 9. This was during a time when the broader cryptocurrency market was losing most of its value.

Although other competitors such as Ethereum, including Cardano, Polkadot, Dfinity, Terra, Polygon, and Avalanche, have all increased huge gains in price over the past year, Solana’s performance was extraordinary.

A key reason for its growth is that the Solana ecosystem has the backing of FTX, one of the leading digital asset exchanges in the world. FTX has launched numerous Solana-based projects over the past few months.

The Solana project is also backed by some of the biggest investors in the cryptocurrency space, including Alameda Research, Andreessen Horowitz and Polychain. Solana also has lower transaction fees than most of its competitors.

Some market experts believe that Solana is at the beginning of its growth cycle and has the potential to match Ethereum in terms of price and market value over the next few years. As such, several investors remain bullish on the medium and long-term prospects of the Solana project.

Solana – A Look To The Future
Solana is one of the leading cryptocurrencies in the world. The cryptocurrency and its blockchain are expected to continue growing and eventually pose further challenges to the Ethereum network.

Sam Bankman-Fried is very bullish about the Solana blockchain and for good reasons. The developers continue to innovate and push for more developments. while Ethereum remains the market leader, Solana, alongside Cardano, will continue to eat into Ethereum’s market share.

In terms of price performance, many analysts are bullish that Solana’s price could top the $1,000 mark over the coming months. If the adoption and growth continue, SOL could reach ETH’s price of roughly $3,500 in the next few years.