What are stablecoins, such as Tether? 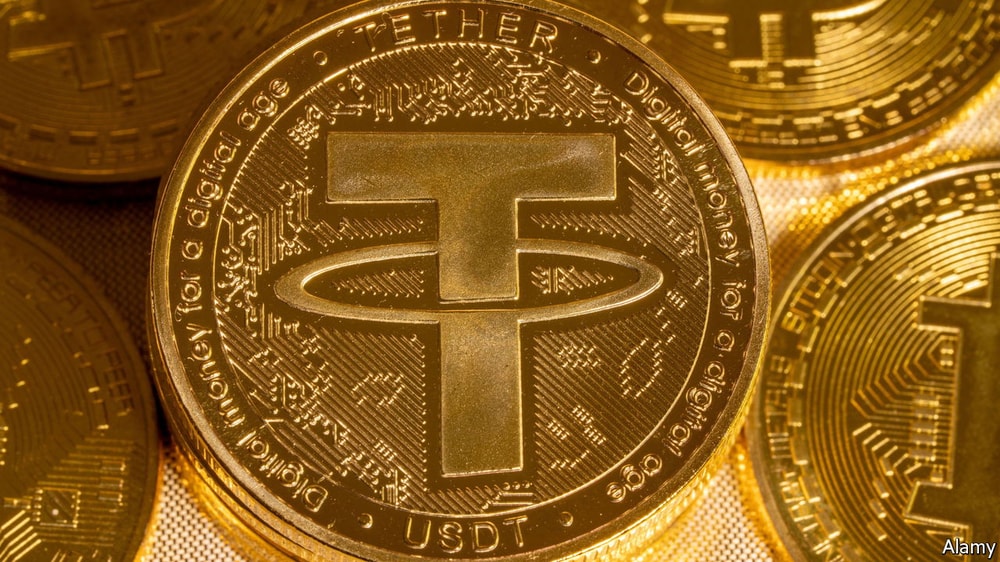 Although 86% of Americans have heard of cryptocurrencies, only 16% have traded or paid with them according to the Pew Research Centre, a think-tank. One reason for that gap is volatility: bitcoin, the world’s most popular cryptocurrency, rose meteorically before falling by about 25% in the month to mid-December.

Stablecoins, a burgeoning class of digital currency, could help crypto to go mainstream. Many use them as a bridge into the broader cryptosphere—the total amount issued grew from $5bn at the start of 2020 to almost $160bn as of December 2021 (see chart). What are these currencies, and what is their promise?

Stablecoins are so named because they are pegged to a fixed quantity of another asset, such as a dollar. This means their prices should hardly fluctuate at all. There are two main ways in which they are backed.

In one category are coins, for instance Tether, that claim to be fully backed by liquid assets such as cash or safe bonds stored in banks. Most exist on public blockchain, but some, including Diem (formerly Libra), the currency proposed by Meta (formerly Facebook) exist on a private network, with the issuer controlling their use. Coins in the second category are backed by other cryptocurrencies.

Dai, a stablecoin that can be borrowed in exchange for other cryptocurrencies, maintains a one-for-one peg with the dollar by moving a pair of interest rates, one paid by those who have borrowed the currency and one paid to those who have purchased the borrowed coins on a crypto exchange. Token-owners in Dai’s governance organisation, MakerDAO, vote on the interest rate to maintain the peg and to fine-tune supply and demand.

For users to trust that a stablecoin will not budge they need to know its collateral is verifiable, liquid and of high quality. No coin currently has all three, says Christian Catalini, director of the Massachusetts Institute of Technology’s cryptoeconomics lab. That means they could face something akin to a bank run during times of stress.

If many people sell their coins at once, the issuer could be forced into a firesale of assets, causing the value of any remaining reserves held in unsafe assets to fall. A crisis of confidence in crypto-backed stablecoins, meanwhile, can break their pegs.

In March 2020 Dai’s price rose as high as $1.10 as its borrowers dashed for fiat money. Many were forced to repurchase coins before they could cash out of Dai, and this pushed up the currency’s price. If holders tried to redeem all $160bn-worth of stablecoins it is unclear how much they would get.

Regulators have taken notice. In October Tether was fined $41m for not holding a sufficient quantity of reserves in quality assets. In America, the President’s Working Group on Financial Markets said last month that stablecoin issuers should be regulated as banks.

Adequately backed stablecoins could offer certain advantages over fiat currencies. They can be more efficient, cutting out middlemen, such as clearinghouses, in payments.

Most American banks charge between $15 and $50 for wire transfers. Globally, the average cost of a $200 remittance is about 7%. Blockchain-based transfers claim to charge less than half that. But traditional banking is muscling in on these advantages.

In Europe, open banking allows cheap, fast payments across banking networks. Central-bank digital currencies hold similar promise and a growing number of governments are considering them. The lasting benefit of stablecoins, therefore, could be in connecting investors to other parts of the cryptosphere.

Those who want to buy NFTs, trade other cryptocurrencies or participate in the metaverse will use stablecoins as a safe way in. They just aren’t safe enough yet.

Read full story on The Economist

Sequel to the allegations levied against Binance by its Nigerian users, Emmanuel Babalola, the African…

From rags to making $4m in a day’: how NFTs are shaking up the art world